Girlfriend Justin Lerner, USA
World Premiere
When an unexpected financial windfall affords a young man with Down syndrome some freedom, he decides to pursue the object of his high school crush, Candy. The decision brings him into conflict with her volatile ex-boyfriend, and the three find themselves involved in a complex, unpredictable triangle of love, aspiration and dreams. Stars Evan Sneider and Jackson Rathbone. 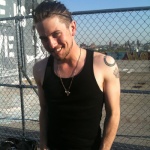